This laboratory has its origins in the Laboratory of Agricultural Production, established in 1900 within the Department of Agricultural Chemistry, College of Agriculture, Tokyo Imperial University, as a laboratory for agricultural production, fermentation and brewing. The first professor, Dr. Yoshinao Kozai, largely established fermentation science in Japan through his research into problems in Sake (rice wine) brewing. Dr. Teizo Takahashi, who became an associate professor of the same laboratory in 1902, made a great contribution to establishing the Japanese brewing industry through microbiological research on various microorganisms involved in the brewing and spoilage of Sake and controlled fermentation of soy sauce and vinegar.

Dr. Takahashi, who had been the professor in charge of the laboratory since Dr. Kozai was appointed president of the University of Tokyo in 1920, became the first professor of the Fifth Laboratory of Chemistry for studying fermentation physiology and brewing, newly established in 1924 within the Department of Agricultural Chemistry; this is the official beginning of our laboratory. Prof. Takahashi investigated brewing techniques, including Sake components and synthetic Sake, and emphasized microbial physiology; he directed the modernization of Japanese fermentation science through his guidance of Dr. Kinichiro Sakaguchi—who became a lecturer at the same laboratory in 1926 and an associate professor in 1927—and others.

Dr. Sakaguchi, promoted to professor in 1939—together with Dr. Toshinobu Asai, appointed associate professor in the same year—actively researched various microorganisms involved in the organic acid, acetone-butanol, and alcoholic fermentation processes. In 1944, Dr. Asai moved as a professor to the newly established Laboratory of Fermentation Production in the Department of Agricultural Chemistry. Dr. Shinichiro Baba, who became an associate professor in the same year, conducted advanced research on microbe glycolytic pathways, until his regrettable passing in 1946. (The above is based on the Centennial History of the University of Tokyo.) 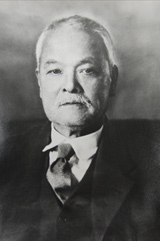 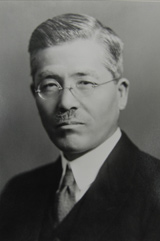 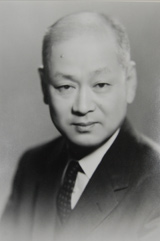 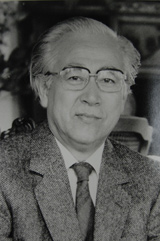 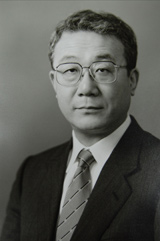 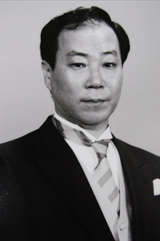 Research during the time of Prof. Sakaguchi

Prof. Sakaguchi’s representative research before World War II was on organic-acid fermentation by molds, especially the Rhizopus genus, and taxonomic research into Koji mold (Aspergillus oryzae) and black Koji mold (Aspergillus luchuensis), which are important for the Japanese brewing industry. The former research led to the discovery of novel organic acids such as ethylene oxide dicarboxylic acid, while also emphasizing the value of biochemical research methods and a critical mind in this field. The latter research initiated microbial taxonomy in Japan and led to the microbial culture collection project through UNESCO and other organizations after World War II.

At the end of World War II, Prof. Sakaguchi became a member of the Hekiso Committee—established to study penicillin—and started antibiotic research. This research, promoted by Dr. Kei Arima and others, resulted in the creation by artificial mutation of a penicillin-producing strain that produced no pigment. This study played an important role in the development of the antibiotic industry in Japan. Many significant results were subsequently obtained under the guidance of Prof. Sakaguchi, including the research of Drs. Hajime Takahashi and Masayasu Nomura into microbe organic-acid metabolic pathways, Dr. Gakuzo Tamura’s discovery of mevalonic acid, Dr. Teruhiko Beppu’s discovery of the organic alloisocitric acid from a mold, and the research of Drs. Kei Arima and Keiji Yano into the degradation pathways of aromatic compounds in microorganisms. In addition, Prof. Sakaguchi and Dr. Akira Kuninaka’s research on microbial nucleic acid-degrading enzymes resulted in the industrial production of 5′-nucleotides possessing umami taste. For these achievements, Prof. Sakaguchi received the Japan Prize of Agricultural Science in 1938, the Japan Academy Prize in 1950, the Fujiwara Prize in 1966, and the Order of Culture in 1967.

Research during the time of Prof. Arima

Dr. Kei Arima was promoted to professor in 1958. The significance of microbial screening, as represented by the search for new antibiotics, was not sufficiently recognized during this time of great interest in amino acid fermentation. Despite the contemporary situation, he actively started microbial screening to develop new applications for the potential functions of microorganisms.

This led to many practical outcomes, such as the discovery and practical application of Mucor rennin as an alternative enzyme for chymosin, an essential milk coagulant enzyme in the cheese industry, the development of a novel microbial conversion method for producing steroid hormones from cheap cholesterol, and the discovery of pyrrolnitrin, a novel antifungal agent. He also made many contributions in basic research on microbial physiology and enzymology, including studies on the reaction mechanisms of oxygenases conducted by Dr. Keiji Yano and Dr. Hirofumi Shoun, a study on the mechanism of colicin action conducted by Dr. Teruhiko Beppu and others, and a study on the intracellular nuclease inhibitor of Aspergillus oryzae conducted by Dr. Takeshi Uozumi and others. For these achievements, Prof. Arima received the Toray Chemical Technology Award in 1974, the Medal with Purple Ribbon, and the Umetaro Suzuki Memorial Award of the Japan Society for Bioscience, Biotechnology, and Agrochemistry in 1976, the Roussel Prize of France in 1980, the Japan Academy Prize in 1979, and the Fujiwara Prize in 1984.

Research during the time of Prof. Beppu

In 1977, when Dr. Teruhiko Beppu was promoted to professor, he and associate professor Dr. Takeshi Uozumi worked on the establishment of the first recombinant DNA technology in Japan. Their specific target was chymosin, a milk coagulating enzyme for cheese production derived from the fourth stomach of calves, which Dr. Arima had used as an object of his study in microbial screening. The cloning of chymosin cDNA and its successful expression in Escherichia coli was published in 1982 in a world-leading paper. This study was very significant, being the first example in Japan of the microbial production of a protein derived from higher animals by genetic engineering.

This research was followed by cloning of the Mucor rennin gene from the Mucor fungus and its secretory expression in yeast, which led to the protein engineering of aspartic proteases. This study not only succeeded in improving the practical performance of Mucor rennin but also made significant contributions to the elucidation of the structure and function of aspartic proteases, which play important physiological roles in various organisms. In addition, Dr. Beppu and his colleagues cloned many bacterial genes, including genes for the thermostable malate dehydrogenase of thermophilic bacteria, serine protease of Bacillus subtilis, an extracellular serine protease of Serratia marcescens, a nitrite reductase and copper protein of denitrifying bacteria, and a cellulase of Bacillus sp. Some of them have been studied more profoundly by precise X-ray structure analysis, and numerous important findings in applied enzymology and microbial physiology were obtained.

Moreover, research on novel bioactive substances from microorganisms was also conducted, and trichostatin, a differentiation inducer for friend leukemia cells, and leptomycin, which causes morphological abnormalities in mold and yeast, were discovered. In the process of analyzing the mechanisms of action of these compounds, it was found that both had novel inhibitory activities that were previously unknown, such as specifically arresting the cell cycle of cultured animal cells in the G1 and G2 phases. In addition, they showed a strong selective lethal activity against cancer cells; therefore, it was proposed that anticancer drugs should be reconsidered from the viewpoint of cell-cycle inhibitors.

Furthermore, it was demonstrated that the target of trichostatin is histone deacetylase, indicating that hyperacetylation of histones is an important factor regulating the proliferation and differentiation of eukaryotic cells. In addition, leptomycin was found to target Crm1, which regulates the nuclear export of proteins. By using leptomycin as a tool in experiments, the nuclear export of many proteins was revealed.

These studies are extremely important because they demonstrated that microbial secondary metabolites play a fundamental role in the analysis of higher-order physiological phenomena, such as the regulation of eukaryotic cell growth. For these achievements, Prof. Beppu received the Japan Society for Bioscience, Biotechnology, and Agrochemistry Award in 1986, the International Union of Microbiological Societies (IUMS) Arima Award in 1990, the American Society for Industrial Microbiology Charles Thom Award in 1995, the Medal with Purple Ribbon in 1996, and the Japan Academy Prize in 1998. He also received the Order of the Sacred Treasure, Gold and Silver Star in 2009, and was honored as a Person of Cultural Merit in 2012.

Research during the time of Prof. Horinouchi

Furthermore, Prof. Horinouchi and his colleagues discovered novel polyketide synthases and novel enzymes involved in secondary metabolism of actinomycetes and plants and used these genes and other plant-derived genes for microbial production of useful substances, including “non-natural” natural products. In particular, the production of flavonoids by E. coli was a noteworthy achievement; it presaged synthetic biology, which is now being conducted very actively.

Prof. Horinouchi received the Sumiki-Umezawa Memorial Award from the Japanese Society of Antibiotics in 1991, the Society of Actinomycete Japan Award in 1993, Kei Arima Memorial Japan Bioindustry Association Award in 2004, and the Japan Society for Bioscience, Biotechnology, and Agrochemistry Award in 2006. In addition, Dr. Minoru Yoshida, who was promoted to associate professor in 1995, developed the chemical biology of eukaryotic cells using chemical compounds such as trichostatin and leptomycin. He moved to the RIKEN Chemical Genetics Laboratory as a senior researcher in 2002. Dr. Yasuo Ohnishi was promoted to associate professor after Dr. Yoshida.

Prof. Horinouchi fell ill shortly after fulfilling his duties as the president of the Society for Actinomycetes Japan (SAJ) at the general meeting of the 2007 SAJ annual meeting in Onomichi on May 31. He continued his research and education with extraordinary physical and mental strength over more than two years battling disease, but passed away on July 12, 2009, at the age of 57. Prof. Horinouchi was awarded the Junior Fourth Rank and received the Order of the Sacred Treasure, Gold Rays with Neck Ribbon.

On July 16, 2010, Dr. Yasuo Ohnishi was promoted to professor, succeeding the late Prof. Horinouchi. In April 2012, Dr. Yohei Katsuyama (lecturer and associate professor since 2017) and Dr. Takeaki Tezuka (assistant professor since 2013) joined our laboratory as staff members, and the current laboratory structure was established.